Gunner, a 17hh standardbred pacer, went through several homes before landing with Jess. Each time, he was sold because of his awkward gaits, goofy personality, and tendency to throw tantrums when the work got hard. When Jess got him, Gunner was under-muscled and had no idea what order to place his giant feet in!
​ 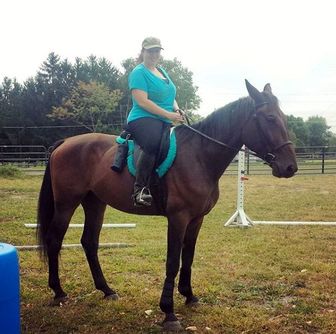 Jess signed up for weekly lessons, which started with a lot of basic ground work exercises to teach Gunner suppleness and body awareness. We incorporated ground poles, cavaletti, and round penning. In the beginning, things were a little rough. 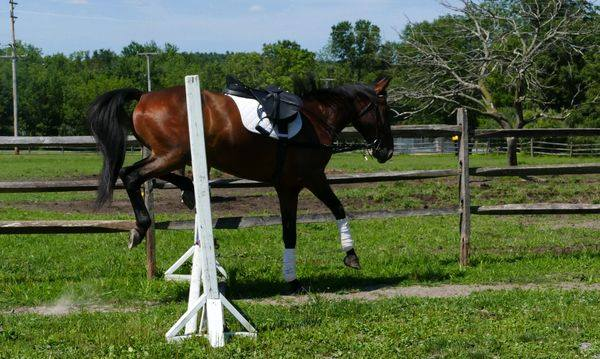 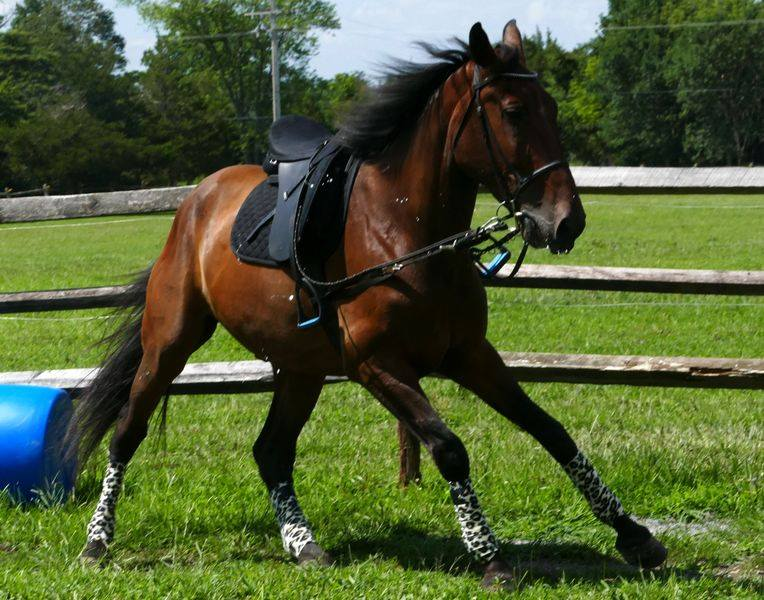 Jess continued to persevere and do her homework, week in and week out, and soon, the results really started to come together!! 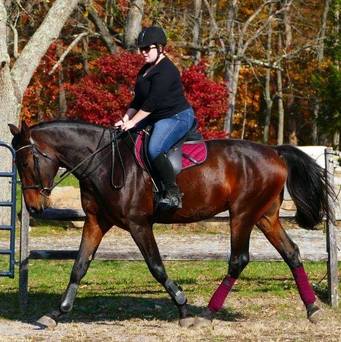 Gunner gaits and balance improved, and we started to be able to do more and more dressage together! His canter also improved... so much so that people questioned whether he was really a standardbred!! Gunner went from being the horse everyone gave a wide berth, to being one of the most reliable horses in the barn! He is currently the go-to mount for anyone who wants to try horseback riding for the first time! It turns out he also has a ton of scope and is very willing over fences, now that he knows where all his limbs go. 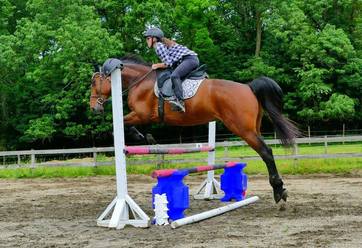 These days, Gunner does a little bit of everything, from dressage and jumping, to trail riding and winning hunter paces. He and Jess even attended the National Standardbred Show, where they made their dressage debut! Their story proves that hard work pays off!! 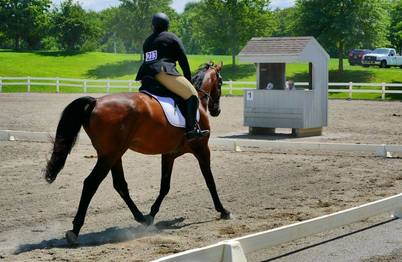 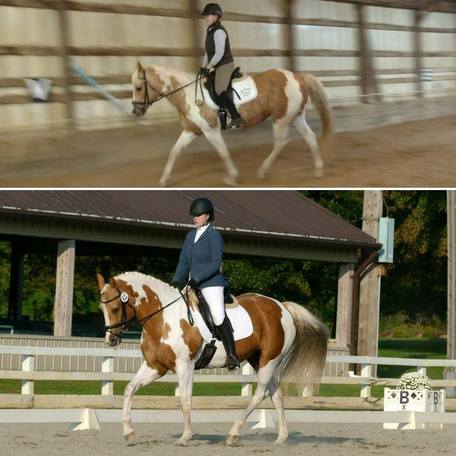 ​The top photo was taken in the fall of 2017, when Sam started taking lessons with her new mare, Kylie. Kylie was a safe, quiet horse, but she didn't have much formal training. The mare was tense, braced, and struggled to accept a contact. Others had suggested putting her in draw reins to "make her give", but this smart paint girl protested pretty clearly to that idea!


​
The bottom photo was taken 11 months later at the ESDCTA Championships at the Horse Park of NJ. After a very successful season of showing, Sam and Kylie qualified for the finals, and did really well! More impressive than the scores, however, was Kylie's total transformation in less than one year! While there is still plenty that we are actively working on, Kylie's attitude, balance, and understanding of the aids have improved dramatically, and we are all very excited to see what the future holds for this promising pair!

CP, a 5 year old Welsh x Arab pony, was bought at the auction as a two year old with an unknown history. When it came time to break him to ride, the pony revealed that he had a nasty buck and a stubborn streak. After he launched several riders, including professional trainers, and sent a handful of people to the hospital, his owner knew the pony needed help. The pony joined TUH as a full-training client in March 2012. He stayed for six months. In that time, he made an incredible and well-documented turn around.

In his early days at TUH, CP demonstrated a buck and 'teleport'. When his tricks didn't get him his way, he resorted to throwing a tantrum as soon as his rider was on board.
CP went home a changed pony. His owner was very happy with his progress and CP's future looks much brighter than it did at the beginning of the season. A problem pony whose outlook was bleak made an incredible turn around and proved to be versatile, willing, and bold. It's amazing what five days a week can do! Be sure to ask how our full training program can work for your horse.

Update 6/4/17: CP continues to do well, several years later. He is being leased by a brave young rider and has started a career in eventing. CP still comes back to TUH for lessons and has proved to be a talented jumper. He made his eventing debut by winning his division at his first ever horse trial!
​ 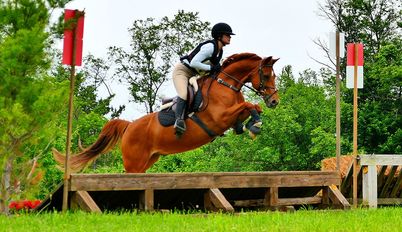 Arrow, a 13 year old quarter horse gelding, was rescued by his owner, Kristin. He came with a mysterious past and an equally mysterious brand on his left shoulder. Research revealed that Arrow had started his life as a rodeo bronc out west! Thankfully, he did not display any bronc bucks under saddle, but he did have a few bad habits to work through. In the process, we found out that Arrow had a lot of anxiety about lunging.

This was Arrow during our first lunging session:
Needless to say, this behavior was unsafe to both the horse and his handler, and it was blocking him from making further progress with his training. With just a handful of lunging sessions, Arrow really made a turn around. He is now relaxed on the lunge line and enjoys his ground work. 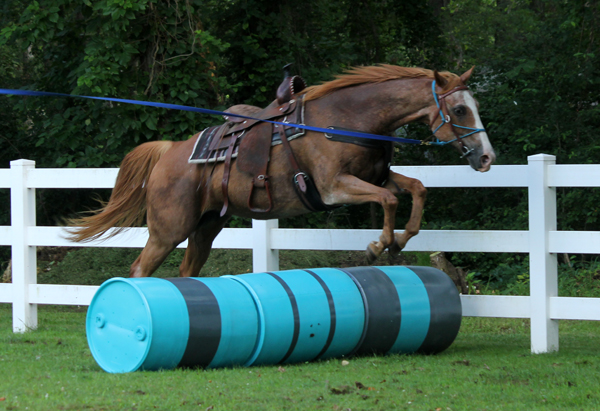 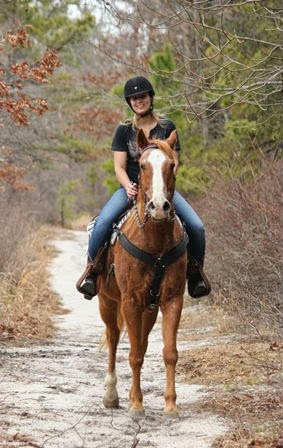 Kristin and Arrow on trail.
Update 2016
Kristin and Arrow have continued to grow as a team. They regularly go to hunter paces, and now they also compete in western gaming and barrel racing. Arrow has gone from being an unruly horse with a troubled past to a fierce competitor. Kristin enjoys regular trail rides, weekend competitions, and the occasional swim with her brave and wiling partner. In 2016, Arrow won Reserve Champion in the adult division on the local barrel racing circuit! 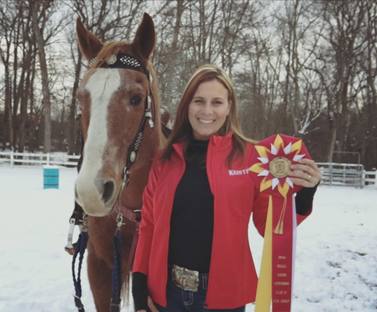 
Arrow also had an issue with trailer loading. This security camera footage captures some of his antics before trailer training:

Dreamy had lived most of her life as a brood mare at a well known farm. She got a late start to riding and the weight of a rider initially sent her into a panic. This mare didn't have a mean bone in her body, but her default response was to buckle in the front and try to lay down. 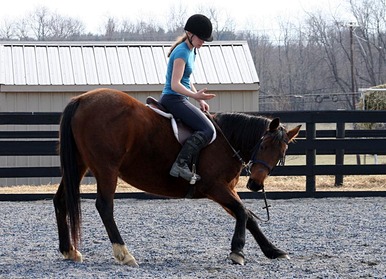 In just a few months, she over came her fear and turned into a quiet and safe riding horse. I continued to work with her once she moved into her adoptive home, installing some dressage basics. Dreamy went on to give lessons to a novice 16 year old and the two of them are currently competing as a team. 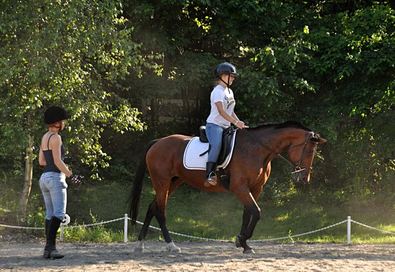 This OTTB came to TUH for some weight gain therapy. His old boarding barn had declared him a hard keeper and couldn't manage to keep weight on him. In a few short months, this big guy blossomed. He filled out, gained muscle, and gained a gleam in his coat. His owner actually didn't recognize him the first time she came to visit during his rehab.